Every once in a while, I read a parenting tip so dumb that I wonder if I am surrounded by idiots.

Tips such as “do not place a Bumbo on the counter,” “talk to your child,” and “do not allow your infant to drink soft drinks” make me feel like a parenting genius because THANK YOU CAPTAIN OBVIOUS, do we really have to spell these things out?!

I’m about to provide another parenting tip—one so obvious in hindsight, but learned the hard way by this parenting “genius.”  If you think THANK YOU, CAPTAIN OBVIOUS…you would be right.

The tip is as follows:

Even if your child is showing TREMENDOUS progress in his/her understanding of concepts and representational thought (i.e. yes, the noise coming from an intercom is actually a person talking! Yes, a stuffed dog and a real dog would both say “woof!” and you can give them both a treat! Yes, toy fire trucks would make the same noise as a real fire truck—good job! Yes, we can see an airplane AND be on one at the same time!)…

…DO NOT TRY TO HELP THEM UNDERSTAND THE CONCEPT OF “DRESS UP” BY PUTTING ON A “V FOR VENDETTA” MASK. 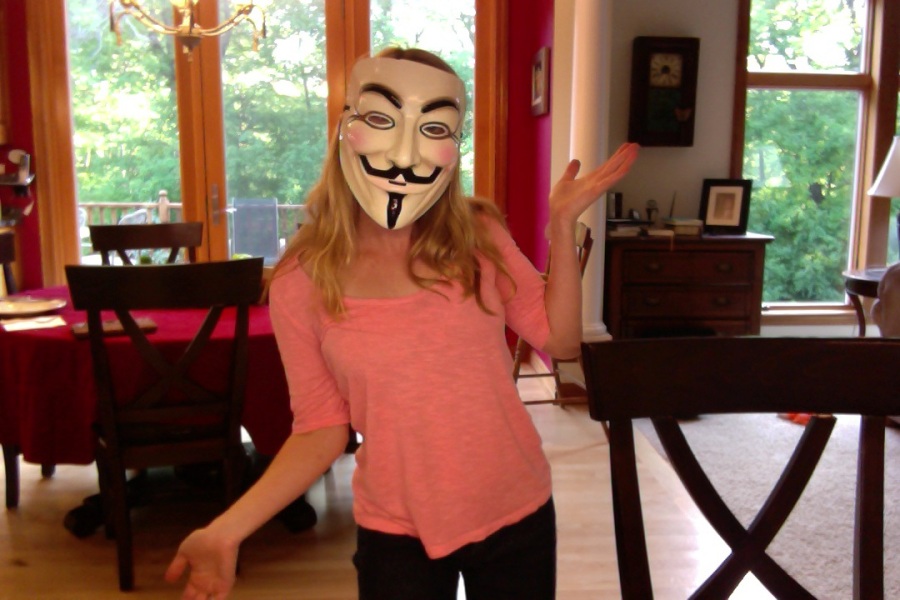 I’m guessing very few of you have ever contemplated this idea, but just in case you–like me–are also
a) sleep deprived
b) feeling pretty high and mighty about your “teaching” skills
c) in your brother’s room, where the aforementioned mask lives
d) close to your child’s bed time, feeling desperate for a new idea since you’ve been entertaining someone with an attention span of 1.2 seconds since 5:45 am
e) thinking “she likes dress ups—this is a dress up! He looks friendly.  She hasn’t seen the movie, so she doesn’t know its affiliation with political uprising”
f) arriving at the conclusion, “this would be a great teaching moment! I’ll show her how I take it on and off and teach her the word ‘mask!'”

…FOR THE LOVE, STEP AWAY.

Wave the white flag for the day, put your child in bed early, head downstairs and have a glass of wine while you listen to her scream about the unfairness of being put in bed 10 minutes early.

It will be far better than listening to the wracking sobs and panicked screams you have created through your own idiocy while you nurse feelings of extreme guilt and wonder how many years it will be before you hear about this in a therapist’s office.  Probably 5.

Zoe is now terrified of a hallway.  A RANDOM HALLWAY.  We’re talking body shaking and gasping sobs when we go NEAR the hallway.  If I was going to knowingly introduce any type of neurosis for my daughter, I could have at least timed the trauma better so that it occurred at the same time as an undesirable behavior! It’s been very challenging to change her diaper lately—she kicks, screams, rolls, pulls hair, and sometimes even tries to bite.  Maybe THAT would have been a good time for “V” to show up, you know? A J. Walter Weatherman moment (“…and that’s why you always lie still for your diaper changes!  Because if you don’t, a terrifying masked man shows up!”)

But no.  I had to pick a HALLWAY for my daughter’s trauma.

Parenting tip: just don’t do this.

Hey, it takes a village, right?

Warmly,
The Idiot of Said Village

Published by Sarah @ Journeying With Him

View all posts by Sarah @ Journeying With Him

Leave a Reply to Sarah @ Journeying With Him Cancel reply